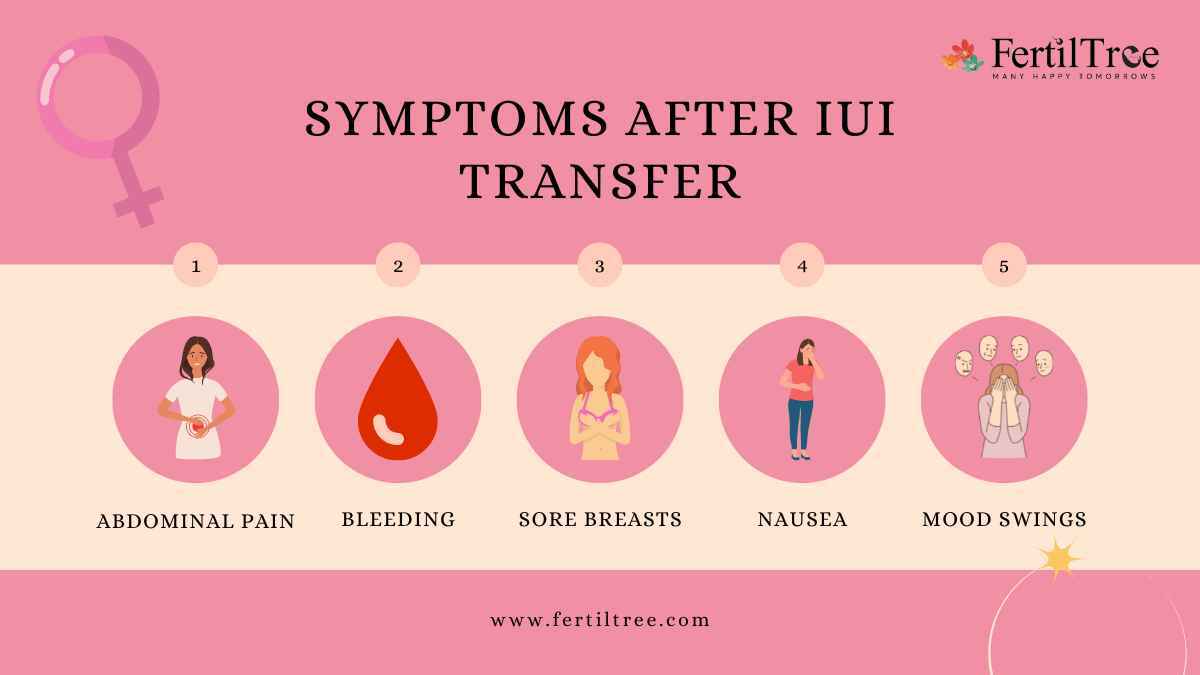 6 Symptoms Of IUI Pregnancy | What To Expect After IUI Procedure

IUI is a fertility-enhancing procedure. In this procedure, the semen sample is processed in the andrology lab in order to procure motile and healthy sperm. After processing, the washed semen sample is gently introduced with the help of an IUI catheter into the uterus. The procedure is done just as the woman shows signs of ovulation.A blood pregnancy test is usually recommended 14 days after the IUI procedure to check for the pregnancy.

In this blog, we’ll read about what to expect after an IUI procedure. We’ll also answer frequently asked questions like what are the success symptoms of IUI, when to take a pregnancy test after the IUI procedure, and more.

So, Is it normal to see symptoms after IUI?

What should I do after IUI?

When Should You Take a Pregnancy Test after IUI?

When do you start experiencing the Symptoms of Pregnancy after an IUI procedure?

Should I Expect Bleeding After IUI?

So, Is it normal to see symptoms after IUI?

Usually, the woman does not experience untoward symptoms. She can proceed with her daily routine.  No bed rest is necessary.

Moreover, sometimes, Early pregnancy symptoms may occur as soon as the pregnancy is confirmed by a bhCG test or there may be no symptoms at all. A feeling of fullness, nausea, drowsiness may be felt by the woman.

The symptoms of IUI pregnancy are similar to normal pregnancy. As IUI is a procedure that assists nature in creating a baby. Hence once pregnant, the woman will feel the same as a naturally conceived pregnancy.

Can the symptoms also be the effect of medication on the body? The symptoms if at all are mild and would not really have any effect on a change in the medications prescribed.

What should I do after IUI?

There is no special care that is recommended after an IUi procedure. Please remember to take all the medication that is prescribed. Here are some of the general queries by the patients:

Is bedrest necessary? Bed rest is not necessary after IUI. After the procedure, it is recommended that you avoid heavy lifting or strenuous exercise for 48 hours. You may resume normal activity after this time period.

How long should you rest for? After the IUI procedure you can remain resting in the procedure room for half an hour.

Should you refrain from strenuous activities? You can carry out your routine activities. Exercise in moderation is permitted.

What is not recommended after IUI? Smoking, excessive consumption of alcohol should be avoided.

After an IUI procedure, you may notice some changes in your body. The most common symptoms include:

When Should You Take a Pregnancy Test after IUI?

It is advised to take a blood pregnancy test 14 days after the procedure of IUI. Approximately 10 days after conception, HCG begins to appear in pregnant women’s blood and urine.

In order to determine whether or not you are pregnant, your doctor will want to see if your body has started producing hCG (human chorionic gonadotropin) in your blood. The amount of hCG in your system will increase rapidly during the first few weeks of pregnancy and then start to decline slowly until it reaches normal, non-pregnant levels. A blood test can measure the level of hCG in your blood and tell you whether or not you are pregnant.

You might also consider taking an over-the-counter pregnancy test at home as soon as you think you are pregnant, but this may not be accurate enough for most doctors’ purposes.

When do you start experiencing the Symptoms of Pregnancy after an IUI procedure?

One may start experiencing symptoms as soon as the pregnancy is confirmed or in most cases a few weeks later. It is important to note that symptoms such as fatigue, nausea, and breast tenderness are not necessarily indicative of pregnancy but could be attributed to other factors such as stress.

Should I Expect Bleeding After IUI?

IUI procedure is non-surgical. Bleeding can be a normal side effect of the IUI procedure. Although it is not common, some women may experience light spotting after the procedure. And it usually occurs right after your treatment.

The success symptoms of IUI pregnancy are mentioned below:

In this time of stress, make sure you rely on your support system and give yourself some time of peace and self-care. Keep home testing to a minimum: after two weeks, you will need to return to the clinic to take a blood test, which will give you an accurate answer.