Achieve your dream of parenthood.
Receive a callback

There are many benefits to using FertilTree's PGT services, mainly to identify embryos that are at risk for developing chromosomal abnormalities. This information is precious for couples who are considering fertility treatment, as it can help them make informed decisions about which embryos to implant.

What is Preimplantation Genetic Testing 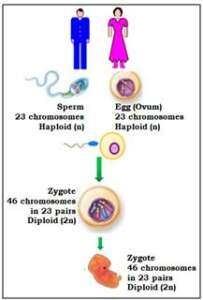 Chromosomes which are present in the nucleus of the cell, contain the genetic material of the cell. Chromosomes contain DNA. Our DNA is organized into small structures called genes. These influence our growth and development. Genes are transmitted from parent to offspring and are considered to be the basic units of inheritance.

In each embryo, chromosomes 1 to 22 are in 2 copies, where one comes from the sperm (biological father) and the egg (biological mother). Thus, an embryo with 46 chromosomes (22 pairs of autosomes and one pair of sex chromosomes) is considered a euploid (Normal) embryo.

(C) PGT FOR MONOGENIC DISORDERS (PGT-M):
Just like chromosomes come in pairs, most genes come in pairs, one from the egg and one from the sperm. When the function of a gene is altered by a change (called a mutation) in the specific sequence of the DNA, a genetic disease results; these mutations can be transmitted in families from generation to generation (inherited) or can be a new change in an individual (de novo). These mutations lead to either single gene or multiple gene disorders.

Genetic diseases can be inherited in different ways. A dominant genetic disease is caused by a mutation in one copy of a gene. The risk for a parent with the disease to pass on the condition to the child is 50%. e.g. Huntington’s Chorea.

A recessive genetic disease is caused by a mutation in both copies of a gene. A carrier has one normal copy of the gene and one copy with a mutation. Most of them are healthy since having one normal copy is enough to prevent the disease. Two carrier parents have a 25% risk to have a child with the genetic disease. e.g. Thalassemia, Cystic Fibrosis.

Sex-linked genetic diseases are caused by mutations on the X or Y chromosomes. Sex-linked diseases can be dominant or recessive and affect males and females differently. In some genetic diseases, the abnormality in the gene keeps increasing in the next generation and its expression is seen only when an affected child is born. e.g. Fragile X Syndrome. Hence, if there is any history of having an affected child, it is
advisable to undergo testing in the next pregnancy and also test other family members.

The creation of a “saviour sibling” involves the selection of an embryo (via HLA typing and PGT) that, when born, could provide umbilical cord stem cells or bone marrow stem cells to an older sibling suffering from a serious medical condition that is amenable to treatment by such a donation. PGT-M with HLA matching for this purpose is suitable because only a limited number of HLA-matched unaffected embryos are transferred back, so this serves as a saviour sibling for the affected child who needs a transplant later on.

Steps involved in the PGT cycle:

For PGT testing, multiple embryos are developed by performing ICSI. The steps involved in PGT are:

Other important genetic tests for PGT/PGD/PGS:

Many routine blood parameters are also tested. Once these reports are ready, the ovarian stimulation cycle begins.

All of the above steps are carried out in the Embryology Laboratory. The trophectoderm cells are then transported to the Genetics Lab for further testing. After the biopsy, the embryos are cryopreserved till the day of embryo transfer.
▪ Different techniques of genetic testing include Fluorescence in Situ Hybridization (FISH), Array Comparative Genomic Hybridization (aCGH) and  Next Generation Sequencing (NGS).
▪ Embryo transfer of the genetically normal embryos is carried out in a frozen embryo transfer (FET) cycle and sometimes in the same cycle by doing a quick run analysis.
▪ A pregnancy test is performed 14 days later. Techniques offered at our IVF Centre in Mumbai:

1. PGT for structural rearrangements (PGS or PGT-SR) by Fluorescence In Situ Hybridization (FISH) for telomeric/cryptic translocations and inversions
PGT by the FISH technique is now mainly carried out in cases where the husband or wife is a carrier of a balanced translocation or inversion. This is required to select embryos free of related unbalanced rearrangements. Pre-PGT work-up of the couple using specific probes for the rearrangements is necessary to check for an additional tiny or cryptic rearrangement which may not have been noticed earlier. The embryo biopsy is done on Day 5. About 4-8 trophectoderm cells are biopsied from each embryo and are fixed on slides and subjected to the FISH procedure using probes specific for each couple, as per the chromosomes involved. The fluorescent signals are observed using the fluorescent microscopy technique. A normal cell will show two signals of each colour for each chromosome. If there are 3 signals or 1 signal present, it indicates abnormal embryos which are not transferred to the mother.

Our team has 22 years of experience in such cases and has reported the first live births for Robertsonian /Reciprocal translocations and inversions in India.

2. PGT for all 24 chromosome aneuploidies (PGS or PGD-A) using the array Comparative Genomic Hybridization (aCGH) technique:
For 24 chromosome PGT, the biopsied cells are “tubed” and the DNA is amplified and tested for chromosomal aneuploidies using the microarray technique. Detection of all 24 chromosomes is possible on Day 5 of embryonic development. The results are available within 24 hours. The technique can also be used for the detection of unbalanced translocations except those involving the telomeres (tips) of the chromosomes.

3. PGT for all 24 chromosomal aneuploidies (PGS or PGT-A) using Next Generation Sequencing (NGS):
For PGT, the biopsied cells are “tubed”. The embryonic DNA is further subjected to a series of procedures and is finally sequenced using NGS technology to check for chromosomal aneuploidies. Detection of all 24 chromosomes is possible on Day 5 of embryonic development. The results are available within 24 hours.

4. PGT for single-gene disorders (PGT-M or PGD):
Whole-genome amplification is carried out to increase the quantity of DNA externally in a PCR machine. Then the amplified product is subjected to further testing for the single gene disorder. The parental genetic markers are matched with the embryonic markers in order to make a diagnosis.

Please note that our centre does not perform any form of sex determination by PGT in any form.

Even though the benefits of PGT-M/PGT-A are considerable, some risks and limitations have to be kept in mind. This procedure cannot guarantee a healthy pregnancy or eliminate the risk of miscarriage, stillbirth or the birth of a child with an abnormality.

Why is IVF required for PGT even when the couple is fertile?

To test the embryonic cells using PGT before implantation for any genetic condition, the embryos should be available outside the body at a very early stage for testing before implantation. Also, more embryos need to be tested for any genetic disorder in order to get at least one unaffected embryo. This is possible using IVF as this allows the creation of multiple embryos.

Why should I choose FertilTree?

There are many reasons to choose FertilTree for Preimplantation Genetic Testing. First and foremost, our team has 22 years of experience with PGT and is fully qualified to provide this type of testing. We have a wealth of knowledge and experience in fertility treatment and protocols, and we’re passionate about helping our patients achieve their goals.
In addition, we offer a comprehensive range of services under one roof. This means that you can come to us for all your fertility needs, from initial consultation and testing through to treatment and post-treatment care. We’ll be with you every step of the way, ensuring that you receive the highest standard of care possible.

The cost for preimplantation genetic testing (PGT) in India depends on the genetic abnormality to be tested. It can be only chromosomal aneuploidy or a single gene disorder or multiple gene disorders. It varies on a case-to-case basis depending on the medical condition and, suitability. It also includes an ICSI cycle and costs for the genetic disorder to be tested.

We have the best-in-class facilities to assist couples with comprehensive PGT treatment. Reach out to our PGT specialists to fulfil your dream of getting pregnant.
Book An Appointment